While we weren’t watching….:

The Inner Mongolian coal boom has turned into a gut-searing contraction, though one that may augur well for improving the environmental profile for the “steam coal” (for conversion to electric power) industry in N and Central China. What happened?

Figures released for the 18 months from Jan. 2013 to June 2014 (the latter including forecasts for all 2014) may not have been a total surprise, but the rate of contraction was, and so remains. While output (physical basis) had grown at an astounding 27.8%/yr from 2000-2010, suddenly 2012 was a sluggish 8%, followed in 2013 by -6.4% then (as of Aug.) -9.3% on a year to date basis for the current year. If it looks like a topout, and smells like a post-crest crash, then indeed it is probably both, and not yet over, with the decline likely to continue for another year or two, as the annual number settles at perhaps 900 million MT (raw), 15 percent below peak.

The stockprice chart for Shenhua Energy – the biggest player in that mining belt (probably 50-60% of total mine output) tell us that though a levelling out was in the air from as early as end-2011, the market outlook has continued to deteriorate all through 2013, and has notably failed to reverse back up through the current calendar year.

On the other side of the coin, the “other” coal boom province – Shaanxi (神木—府谷—东胜 mining areas) – has suffered no such a rout, certainly not in terms of national production share, which has held steady at about 12.5% and output at about 450 million MT/yr (physical bulk).

The good news may be that the shift reflects a rising market advantage for superior grade steam coal as a whole, meaning less per unit mining, and less toxic pollutants (esp. sulfuric and nitric acids related) coming out of the smokestack. 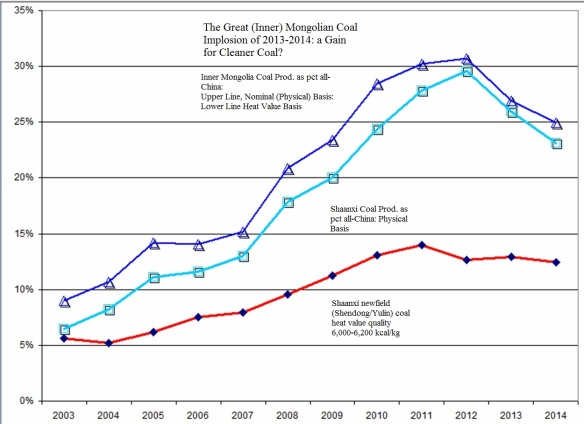 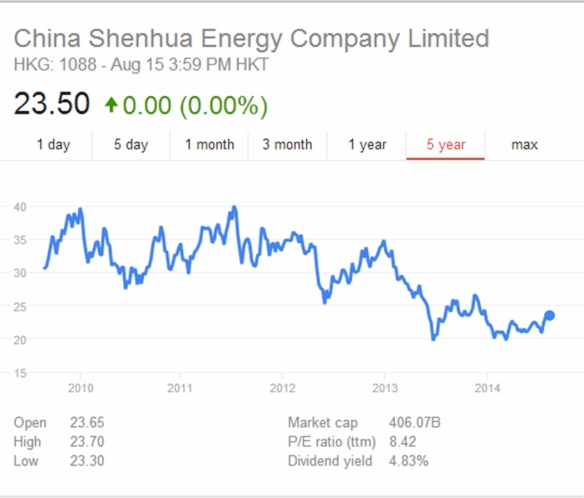