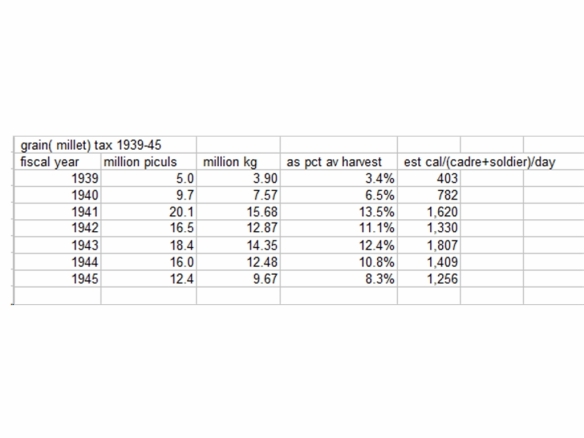 But if these corrective reductions reduced the peasants’ burden, they also (above) would have cut into the 120th Div.’s per diem nutrition, perhaps as much as 25%, as they offset for reducing the per household tax by perhaps 20%. 1,250 cal/soldier/day is, as we have shown above, about 50% of the nutrition needed by a male adult (optimal), though not far from the estimated MINIMUM daily diet needs of the adult male today. Though still 30% higher than the average for Hunan (non-Central) soldiers, they could not have kept the 8RA at levels of fitness for hit-and-run fighting.

I offer this data, with some risk of miscalculation, because it explains why the “Great Increase in Production” Campaign of 1940-1943 was undertaken, which is where, how, and why the infamous Nanniwan reclamation campaign was publicized as a “model” for other units to plant their way out of the deficiency, and in the process distort not just the quotas of new surplus, but very probably serve as cover for an increase in opium production and exports to earn the hard (fabi) currency needed to switch to a taxgrain PURCHASE system.

Ends justifying means in wartime more than ever, it is neither surprising nor shocking that this drug traffic took off. But it had internal political consequences, not the least for Gen. He Long, the ambitious and (by reputation) corrupt chief of the 120th (8 RA) Division.
According to Vladimirov (p. 95), the 120th’s HQ at “Tsai-ling” 柴陵 is the traffic nerve center. He represents the “bandit” element in the 8RA/PLA command
Ct with gelaohui.

Wang Zhen of the 359th (tuanzhang, brigadier) brigade who was dispatched (by Zhu De) to scope out Nanniwan would have been his subordinate, and in all likelihood was handpicked by Ren Bishi, the Div Political Commissar.

“Nanniwan is a gorge about 90km southeast of Yan’an, Shaanxi province. In response to economic blockades by the Imperial Japanese Army and Kuomintang in 1941, the Communists set up an Opium production committee with Ren Bishi 任弼时 as its head and began experimenting with small scale agricultural development as well as poppy production in a bid to become self-sufficient. The 359th brigade of the Eighth Route Army was deployed to Nanniwan to improve productivity. In 1943 Nanniwan was heralded a success, and a propagandist song was commissioned. The lyrics, written by He Jingzhi, were set to a traditional folk melody of northern Shaanxi.”
http://en.wikipedia.org/wiki/Nanniwan
在柴陵，还在后方的步兵第120师师部，拨出一间房子来加工原料，制成鸦片后就从这里运往市场。……在第120师师部里，讨论的中心不是战斗任务、作战和其他军事问题，而是怎么做买卖和赚钱。

Why the opium planting push?

There is almost no doubt that poppy-planting, processing, and taxation became major sources of SA “central” (Caizhengbu) revenue from 1940 or so onward.
But it is (to me) far from obvious that this took place to guarantee food supplies for the army units and cadres who ate from the government till (as opposed to extracting food from the peasants under their immediate spatial control). And still less credible (more below) that the Nanniwan model reclamation project was a subterfuge for poppy planting. though that has become a consensus position amongst regime critics.

Another explanation, which makes more sense, is that it was more or less a permanent feature of the rural economies of villages along the northern and western margins of the SA (Gansu and Ningxia), and of abutting Inner Mongolia, where no (centralized) controls on anything were possible. What seems to have changed in 1941-2 was the lifting of suppression in the Shanxi-Shaanxi (eastern) margin of the SA, in order I suspect to compensate for the hyper-taxation (in kind) of the 1941-3 grain collection drive, which pushed the core area producers to or over the rim of self-sufficiency.

The documents that Chen Yungfa and others have turned up for two villages in NW Shanxi are not self-explanatory, but DO indicate that poppy planting was subjected to a highly PROGRESSIVE marginal tax, the effect of which should have been to discourage hyper-planting on the part of the better off (larger) households, while encouraging the poorest stratum to plant as much as their plots could handle.