Yet another classic BW film – to my mind the best of them – about Historic Shanghai (SANS waiguoren!). Though it could be about any Big City slum…”Night Inn” (“Flophouse”), 1947. Once again: the credit sequence and its underlying montage catch our attention. How does the matrix of actor and enacted operate and what view of social morality does it pre-communicate? How ambitious is the portrait of Urban Place as an overbridging unity? Why did its eye-catching portrait take such precedence in the first minutes of the 30s films? But here cease to enthrall by the post-War years? (After all, the Shanghai Bund and other of that city’s icons from the 30s have not just survived but- as “restorations” – climbed very high indeed in the post-1980s re-imaging of China). Again, the “overture” (credits, establishing shots, aerial takes, etc) has a great deal of impact- more than in these times – on how we apprehend what follows.

Shanghai, still dark (阴暗) and gloomy, perhaps even more so now that we are looking back from the late 40s. Dir 黄佐临, playscript 柯灵, 文华影片公司 studios, rel. 1947. But the screen credits play out in a way entirely different from the ’30s “left” films discussed above.

The opening sequence is characterologically specific – actors/characters are all people with sharp-etched names, often caricatured ones, who make choices (or discover by trying that they can’t). They are all trapped yet also above or beyond mindless despair (Malutianshi), or for that matter “chin up” bonhomie (Crossroads) an affectation that still overrides character and choice. So they not only have mis-en-scene appellations. But abrasively ironic ones, taking us before we start, into the conflict between self-perception and other-perception. 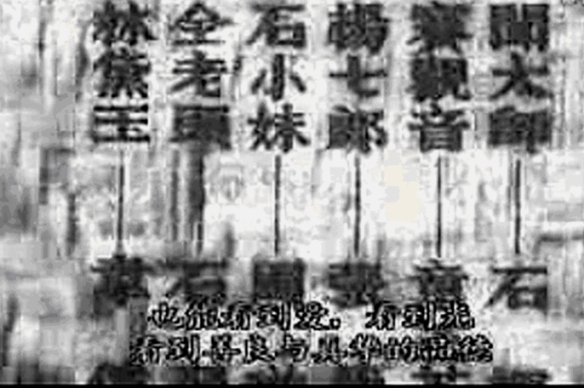