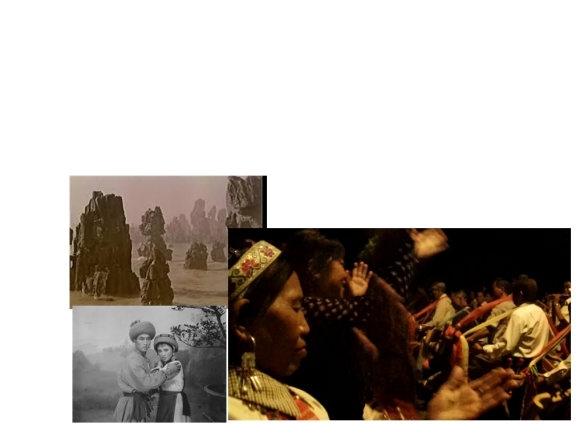 One does not usually associate “opera” with film, nor ask what the options are when any given “operatic” work is proposed as material for videographed recording. But as soon any screen-studio entrepreneur decides that one or another item in the operatic repertory (since the 1930s very much inclusive of its younger sister, the para-genre of the “musical”) is worth making accessible through recorded distribution, as a means of broadening access beyond the confines of overpriced live theatre, a choice needs at once to be made regarding point of view, reflexivity. The easiest (most obvious) choice is (was) the rather flatfooted approach of ostensibly pure documentation: a neutral camera documents a performance meant to seem not-particularly-when or not-particularly-where, with an audience’s subjective filter removed from the transaction, the ambient noises (coughs, etc.) that clue a live performance taken away from the enactment by in-studio private, well-rehearsed, audience-buffered singing. (A practice surviving into the MTV clip) The grandfather formula/prototype of course is the single singer bundle, which was and is non-visual: originally 2 arias were lifted from a vocalist’s signature repertory (Caruso’s Pagliacci for example), with any evidence of original context wiped clean. In the age of the 20-min per side LP (for CD, DVD doubled), the discontexting, un-“performed” performance, expands display a special bravatura in the interpreting of one or another composer’s works (Cecilia Bartoli Mozart, Fischer-Dieskau Schubert, etc.) One perhaps imagines or remembers a concert hall (the Vienna Philharmonic’s) where the vocalist often is a key prop in an annual rite, and (with real-time broadcast) the listener is on the path becoming an audience. But it is still a documentary, of SOUND, an expensively licensed souvenir meant to embed or sell one or another soloist as he/she sings a favorite, albeit decked out in eye-grabbing evening dress.