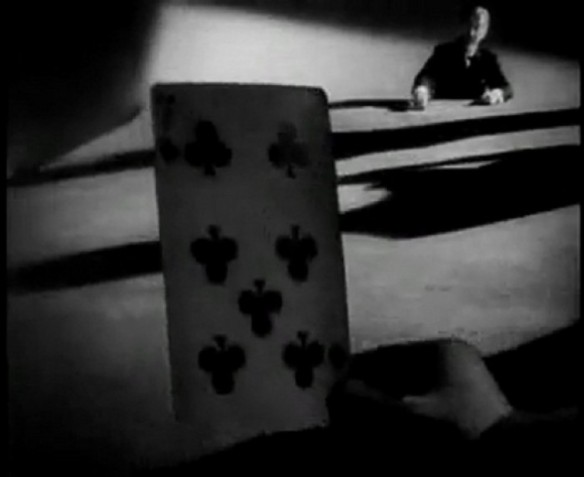 spellbound at the card table

These remarks are posted to flesh out some of the points made about the updating of the art/propaganda marriage through PR industry developed psycho-manipulative technologies in general.

Remember what a stir Hitchcock made when he commissioned Dali to do those scarifying dreamboards for Spellbound (1945!!!). I was only 2 so missed the initial release, but see it now at least once a year. I still remember being told somewhere by someone (is it is the film?) that psychoanalysis when the film was made, Freudian dream-dissection was a new and still unproven technology. Art is art, Freud is inkblot, real life motive are something best tracked down by unrelated methods. One wouldn’t have expected a war weary public or returning GI’s to take to “it”: Dali, Freud, the whole enchilada.. But they did.

As did I once dreamlife took me back to it. It is obviously impossible to film or even to paint what is experienced in a dream, but the workings of the pre-processing are recoverable. Both on the couch but also in Rorschach transform performed backwards (what truly intriguing “shape” prompted this?).

So Dali’s inventions, though in no way correlative with what I could remember “seeing” still seemed a useful facsimile of the coding that our minds employ to speak over our around our earplugs.

Playing cards are one of the most intriguing examples. Who doesn’t remember the mystery of the dealing and drawing of the seven-of-clubs by Gregory Peck (eventually a marker for the 21 Club)? Or the terror/intrigue of the Queen of Spades court, so often quoted in modern dance or ballet? Seems hardly accidental that Gypsies use Tarot cards to undream our fates.